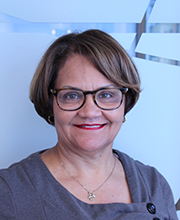 Ms. Frances Ferreira has a vast range of experience in developing contexts and education management related to leadership, skills development, monitoring and evaluation, women’s empowerment, and gender equality. Since joining COL in 2007, Frances has held the posts of Education Specialist: Basic Education and Open Schooling, Senior Adviser: Women and Girls, and Education Specialist: Gender, before taking up the Acting Director: Skills role.

With her strong passion for women’s empowerment, Ms. Ferreira is leading COL’s GIRLS Inspire initiative and COL’s Commonwealth Wise Women project which are contributing to improved livelihoods of women and girls in underserved communities.

Prior to joining COL, Ms. Ferreira, was the first chief executive of the state-owned Namibian College of Open Learning.  Previously, she served the Namibian community as a teacher and school principal, and as the first female Mayor of Grootfontein in 1994.   She has also served as Chair of the Namibian Open Learning Network Trust and Chair of the Distance Education Association of Southern Africa (DEASA).

Ms Ferreira’s contribution to the field of open and distance learning in Namibia was recognised in 2002 at COL’s 2nd Pan-Commonwealth Forum on Open Learning, when she received the Distance Learning Experience Award from COL

Frances has co-authored and co-edited various publications including Perspectives on Distance Education – Open Schooling in the 21st Century (2009); Open Schooling with Open Educational Resources: Opening doors, creating opportunities (2013) and Women and Leadership in Open and Distance Learning and Development (2013)