Blockchain: Is decentralised certification the future? 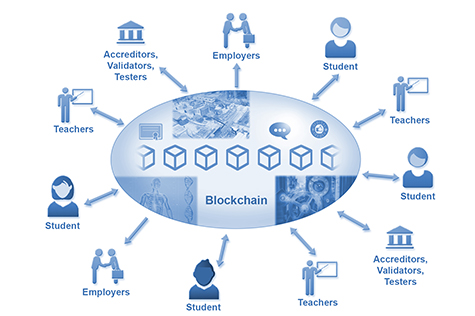 Online learning is gaining popularity in almost all parts of the world. A consequence is that learning takes place in many contexts, including the virtual classroom. Interactions in online forums, discussions on social networks such as Facebook or Twitter, and access to open educational resources and open access repositories also contribute to learning.

Tracking accomplishments and recording the evidence for them requires contextual and international recognition. E-portfolios and Open Badges are available options but are often not considered adequate. This has led leaders in technology-enabled learning, such as The Open University (UK) and the Massachusetts Institute of Technology (MIT) to explore the use of an open-source platform for certification that is global in scope and accessible. It would be more like an infrastructure for online certification. The core technology here is called the blockchain.

A blockchain is an open, digital ledger. As a distributed ledger, it enables many stakeholders to post and maintain entries. Transactions can be grouped and identified with a particular signature. This is called a block. A new block identifies the signature on a previous block and links to it. Thus, a chain of blocks can be formed. A block in this chain necessarily refers to its previous block. The core technology in blockchain enables changes in the chain at various nodes to be recorded (almost simultaneously). This is built on the collaborative, peer-to-peer network of user computers that work on this distributed digital ledger. No intermediary agency is required to maintain the process.

In higher education, it is possible for a learner and an institution to work together to create specific blocks. Such blocks will contain records of the learner’s online transactions, in the (virtual) classroom or in social spaces and elsewhere, with peers and mentors as well as with resources. The institution can sign the block with its cryptographic key. Once signed off, the institution has no role in furnishing the records. A learner can furnish a key to a potential employer, who can analyse the transactions to assess the suitability of the learner for employment. The records are not editable, preventing potentially fraudulent claims. Some academics do caution that wider availability of the unalterable records of a young person’s online activities could limit the individual’s work and career options at a future date.

A widely known use of blockchain is what are called cryptocurrencies, the most famous example of which is BitCoin. This is a currency that has no sovereign body or bank owning or controlling it yet is used in commercial transactions. (Some universities now accept fees in BitCoin.) The finance industry is keenly promoting blockchains as a way to reduce transaction costs.

More importantly, blockchain technology is viewed as a potentially powerful way to decentralise the Web. Sir Tim Berners-Lee, inventor of the Web protocol, has frequently expressed his concern that the Web is dominated by a small number of mega-actors. He, along with pioneers of today’s Internet, advocates decentralisation to retain the unfragmented and open character of the Web. A recent article in The Economist (18 June 2016) points out that the technology for open, collaboratively maintained databases such as the blockchain can only get better, opening new opportunities for affordable and authentic certification in the world of online learning.

Blockchain: Is decentralised certification the future? was originally published in the July issue of Connections.