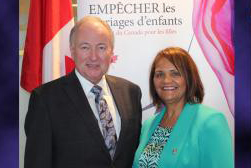 The Commonwealth of Learning (COL) welcomed distinguished guests Wednesday morning at its headquarters in Burnaby, British Columbia for a special announcement that will bolster its support to girls and women of the Commonwealth.

As a leader in open and distance learning, the Commonwealth of Learning is leveraging new and innovative technologies and models to ensure better access to education for girls around the globe. Expanding access and improving learning outcomes for girls and women is a shared priority for both COL and Canada. Wednesday’s announcement by Minister Nicholson will see Canada invest more than $2.3 million in a Commonwealth of Learning project to promote secondary schooling and skills development training for girls and women in Commonwealth countries through open learning and distance education. In addition, as announced by Minister Findlay, Canada will renew more than $7.8 million in funding for the Commonwealth of Learning over the next three years in support of its new Strategic Plan and long-term initiatives in the areas of education and skills development.

Speaking by video from their homes in Bangladesh and Pakistan, several girls who are now accessing schooling through COL’s Open Schooling initiative shared their stories as part of the morning’s proceedings – though theirs have happy endings, their experiences are a somber reminder of the necessity of COL’s projects and programming, which are directly addressing gaps and challenges aggravated by unequal access to education for girls.

Their messages of hope and thanks were echoed by young Canadian women and girls who attended Wednesday’s announcement to demonstrate one of COL’s leading innovations to Honourable Ministers and guests including Senator Yonah Martin, and B. C. Member of Parliament Russ Hiebert. The innovation, named Aptus, is technology-based solution developed by COL as a means of extending girls education to even the most remote, resource-poor areas where limited access to the internet or grid power poses serious challenges to technology enabled learning for girls. Aptus, which consists of two devices, (1) a battery, and (2) a specially configured ‘miniPC’, is capable of hosting large collections of learning materials in print and video format, as well as powerful applications and tools including a full-scale learning management system (LMS), and file sharing applications the educators and learners can use to share local content – all without connecting to the internet or grid power.

Victoria Askounis, a Grade 5 student from British Columbia, Canada shared how she used Aptus for her own learning: “I used Aptus to learn about long division. We learned how to do long division in my math class this year, and I found this video to help me understand it better […]. It’s really good that girls in other countries can also get help with math and learn how to do long division, even if they can’t go to school, like I do in Canada.”

Professor Asha Kanwar, President and Chief Executive Officer of the Commonwealth of Learning expressed her sincere gratitude for Canada’s support in ensuring that education, not marriage, becomes a reality for all girls. “Girls and women continue to remain seriously disadvantaged across the Commonwealth. The Canadian government’s international advocacy efforts to prevent child, early and forced marriage are already drawing attention to this major challenge. The Commonwealth of Learning can become an effective instrument for Canada in these efforts which will serve to secure our common future.”