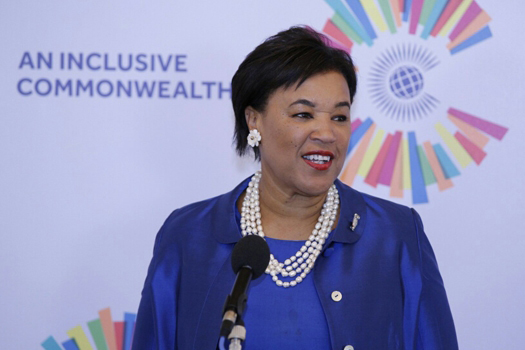 COL is delighted to welcome the Rt Hon Patricia Scotland QC, who took office as the new Commonwealth Secretary-General on 1 April. Nominated by Dominica, she is the first woman to hold the post. “Baroness Scotland brings a great distinction and a wealth of experience as the new Secretary General of the Commonwealth. She is a role model for all women in the Commonwealth” says Professor Asha Kanwar.

The four themes Baroness Scotland spoke about on her first day in office are also very relevant to COL’s work in both its sectors, namely education and skills. Extracts from her speech below:

“I want to put the wealth back into Commonwealth but I also what to put the common back into wealth. There are four themes that I want to focus on as Secretary-General.

This has always been a priority for me. Domestic violence affects one in three women across the world and I don’t need to tell anyone here about the pain and lasting damage it causes not just for those directly affected but for us all.

Violence and abuse robs children of the ability to develop and grow into their full potential and so it is literally stealing all our futures.

Across the Commonwealth people have told me that if we continue to allow women to be abused and disregarded then that has a huge impact on the social and economic health and wellbeing of our world.

If there is not peace in the home, there will not be peace in our world.

I come from a small island so this is something I understand all too well.

And for so many of the Small Island States this is not about the future, we are living with the reality of climate change now and have been for decades.

But people have also told me how working together can make a difference – put simply, we would not have the global climate change agreement without the work started by Commonwealth countries in the Caribbean and the Pacific, forward to the Commonwealth Heads of Government Meeting to success in Paris last November.

And there is so much more we can still do.

Everyone wants to see the commitments we’ve made in Paris turned into real action, there is so much we can learn from each other and so much we can show the world about building resilience and finding innovative solutions which work, to make the world safer for all of us.

One of the big issues that we have all identified today – not least in the UN Sustainable Development Goals – is how we together address corruption, champion good governance, human rights and the rule of law in line with the Commonwealth Charter.

We are fortunate in the Commonwealth that we share the common law we can create a best practice toolkit to deal with corruption and other legal challenges.

Fourthly, young people – 60% who are below the age of thirty – who are our greatest asset, because our true common wealth is who we are and who we want to become.

So many young people have shared with me their vision for a future that is bright and hopeful and we need to make sure they have the health, the security and safety, the support in social and cultural skills and education to make those dreams a reality so they are not tempted by the destructive agenda of the extremists.”