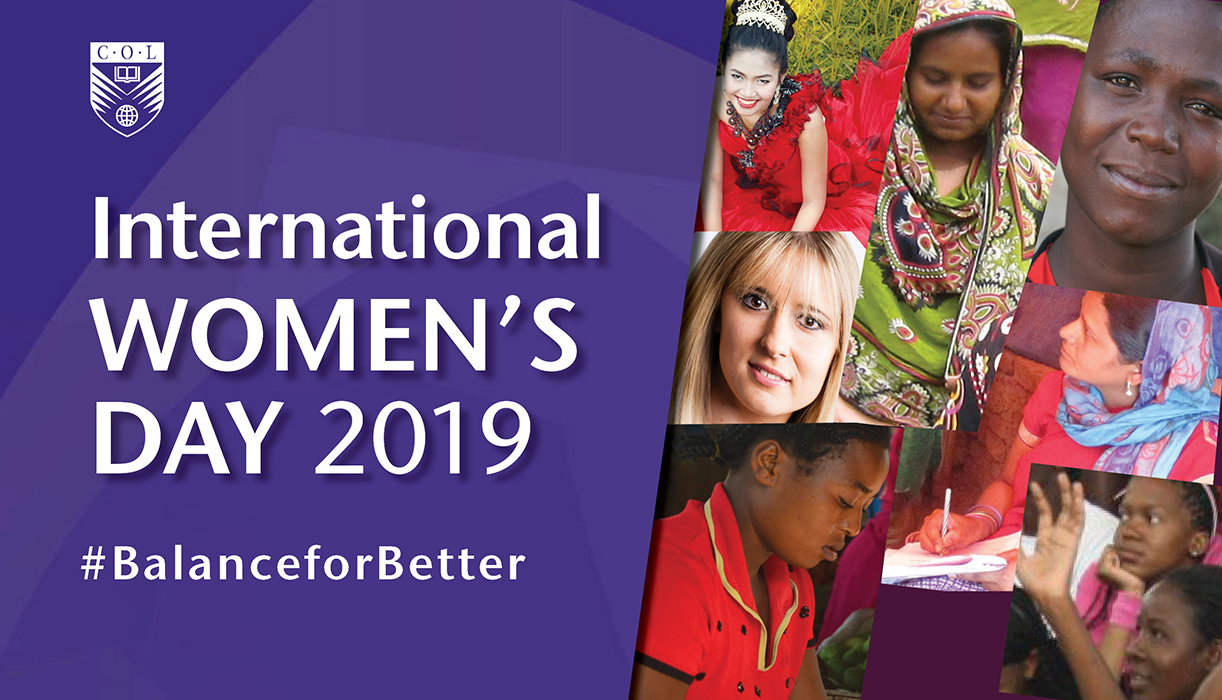 Greetings on International Women’s Day 2019. We’re almost one fifth of the way through the 21st century and yet some outdated challenges persist. One of these is the wide prevalence of child early and forced marriage. What are we doing to prevent this?

With support from the governments of Canada and Australia, COL has been working with partners in five countries, Bangladesh, India, Pakistan, Mozambique and Tanzania, to skill girls for livelihoods so that child early and forced marriage can be prevented. Let me share the stories of three girls with you.

Sumaiya Khatun from Bangladesh is 14 years and dropped out of school in grade 8. She enrolled in COL supported training, but was suddenly absent for several days. Her parents had arranged her marriage. The community tried to persuade Sumaiya’s parents to stop this union. Her father was very angry, but when he realized that he could be sentenced to two years’ imprisonment or have to pay a huge fine according to the Child Marriage restraint law, he relented and has now let her join class 9. This shows the importance of laws and legislation and the role of the community in effective implementation.

In India, Rupali dropped out of school when she was in grade 9. She enrolled in financial literacy classes and opened her own savings account. She received training in goat rearing and artificial insemination. Today she is known as a ‘goat doctor’ and earns her livelihood through artificially inseminating goats. Rupali intends to buy a smart phone so that she can use it to market her services and access information to improve her practice. Today girls know that with hard work and perseverance they can achieve their dreams.

In Mozambique, Natalia’s parents could not afford to send her to school and a wealthy man paid her school fees when she was nine. When she was 17, the donor came back and claimed his investment. Having no money or assets her parents allowed the man to marry her. A journey of torture and violence followed. After having two children, she decided to leave her husband out of fear for their lives. The COL-supported training taught her problem solving skills, as well as technical skills in food and nutrition. Natalia says, “I am confident that I will raise my children differently from the way my parents raised me thinking that marriage is the solution to poverty for girls”. Opportunities for skills development are providing a way out of the vicious cycle of poverty and violence.

UN Women has put forward the theme of, ‘Think Equal, Build Smart, Innovate for Change’ for International Women’s Day this year. As we can see from these examples, the girls are now thinking smart, building better lives for themselves, their families and communities and inspiring other girls. Innovations such as mobile training centres and boat schools have helped us to reach the last girl in the queue and change the thinking in the community.

What can each one of us, both women and men, do to ensure that our girls go to school and have happy childhoods? Let us become champions and advocates. Let us ensure that the minimum age of marriage for every girl everywhere is 18 years. Each one of us needs to be vigilant and play a proactive role in safeguarding the childhood and dignity of our girls. Let us take this pledge today.