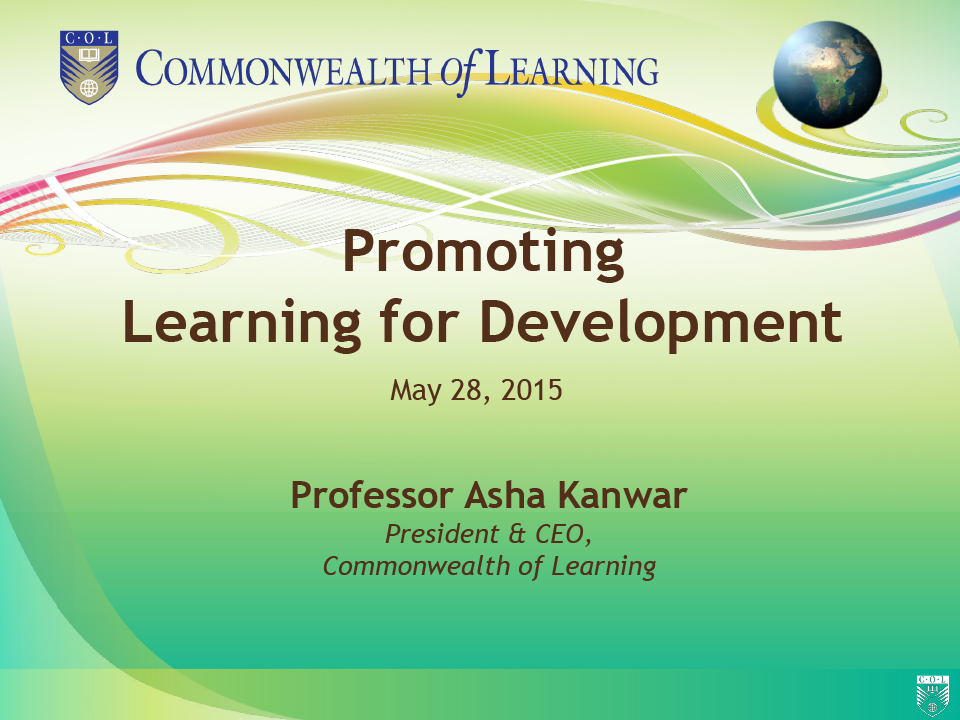 It is a privilege to present the Commonwealth of Learning or COL to you. I will give you some concrete examples of our work to give you a flavour of what we do.

As you know, COL is an intergovernmental organisation established by Commonwealth Heads of Government when they met in Vancouver for CHOGM 1987. Ever since we’ve been in beautiful BC, hosted by the Government of Canada.

Our mission is to help Commonwealth member states and institutions to harness the potential of distance learning and technologies for expanding access to education and training.

COL believes that access to learning is the key to development.

As a result of the wide consultations in the Commonwealth, COL developed a strategic plan for 2012-15, which comes to a close next month. COL organised its work in two sectors: education and livelihoods & health and two cross-cutting themes of elearning and gender.

As countries achieve success in providing universal primary education, there are still significant barriers preventing many young people from entering secondary education. COL works in 26 countries to support open schooling to increase learning opportunities for secondary education, particularly for girls. As this young woman from Bangladesh says ‘I left school in year five at the age of 12. I am 22 now and have 3 children. I went back to school so that I could help my children with their schoolwork.

Well-trained teachers are critical to improving the quality of education. Many governments find that English and Maths teaching are two weak areas. COL has developed free collaborative content on English Language Teaching which has been used to train teachers in Kenya. Teachers have indicated that students are already demonstrating better learning outcomes. The teachers and the students in the classes are the same – but what is new are the teaching resources which are making the difference.

Many Commonwealth countries are trying to improve the quality of Higher Education. In April we conducted a leadership training programme for VCs from 15 universities in Pakistan supported by the British Council and HEC.

Commonwealth Ministers of Education directed COL to establish a Virtual University for the small states, a network of 31 countries. This network has connected all small states in a common endeavour and strengthened Commonwealth cooperation.

Here is Marcia Musgrove of the Bahamas who benefitted initially from a VUSSC course and went on to do a master’s degree – she calls it the VUSSC snowball effect in the tropics!

Skills development is a major priority for most governments. COL has developed courses in Basic Trades and Vocational literacy. Working with the Ministry of Education, Nauru, COL supported a training programme on working with concrete where 167 young people qualified.

Millions of farm families do not have access to learning in developing countries. COL offers a new approach called the Lifelong Learning for Farmers, or L3F. COL catalyses the links between the civil society, experts and financial institutions to develop multi-media based learning. Research shows that for every dollar invested, income and assets worth $9 have been generated. This is active in India, Sri Lanka, Kenya, Tanzania, Ghana, Uganda, Papua New Guinea.

These photographs are of a learning programme called the Bag of Life in a district of Malawi with extremely high rates of maternal and child mortality. The community develops programmes in the local languages that reach thousands of learners through community radio and have resulted in health-seeking behaviours.

Our work in elearning cuts across all initiatives. Here are the graduands of the Commonwealth Certificate in Teacher ICT Integration in Antigua and Barbuda.

Our work in gender relates to internal as well as external capacity building and underpins everything we do.

COL established PACFOLD or the Pacific Regional Centre in Flexible and Open Learning for Development at the USP in Suva. The Centre to expected to become a hub of world class expertise in distance learning and technology in the region. The Hon Minister of Education, Samoa is seen here launching the centre

Internet usage is increasing but only 40 per cent of the world’s population is connected. How do reach the unreached?

Aptus or the Classroom Without Walls is one possible solution. It is developed by using readily available and low cost components, and costs about $ 100. Aptus does not require power from the mains. We can use solar chargers instead. It does not require any connectivity. We use a wireless router. All this enables teachers and students to access good quality digital materials, through this device. Through the generous support of Hewlett Foundation, we will present one such device to each delegation during the 19th CCEM as a demonstration piece.

The Hon Minister of Education, Vanuatu presented Aptus to his officials for deployment in remote island schools.

COL offers MOOCs for Development with its partners around the Commonwealth. This means offering MOOCs in low-bandwith situations in developing countries. COL recently offered a MOOC with the African Virtual University for the professional development of teachers. COL offered a MOOC for gardeners in India that was delivered through basic mobile phones and taught in Hindi. You will be pleased to note that the MOOC on mobiles-for-development, that COL offered in partnership with IIT-Kanpur, won an international award in February this year.

COL has integrated RBM in all its work and commissioned an external evaluation, supported by DFID, of its impact over the past nine years. The reports states that ‘COL has had a major impact on individuals – a significant impact on institutions and organisations (but we need to do more to influence policy at the national level) is a highly respected and well regarded, flexible and nimble organisation which leverages partnerships – to achieve outcomes’.

COL also commissioned an external evaluation of its current Strategic Plan. The evaluators conclude that ‘All the initiatives moved successfully forward, on time and within budget. The large majority of the agreed Performance Indicators were met by March 2015.the relative cost-effectiveness of COL has been commented on favourably.’ Both reports will be available on COL’s website.

In the same spirit of transparency and accountability, COL will present reports of what it did in each Commonwealth country. The Compendium entitled COL in the Commonwealth will be presented to Ministers of Education at the 19th CCEM next month in the Bahamas.

With that let me thank you for your contributions both financial and intellectual, and for your kind attention.