The Blue Economy: Origin and concept 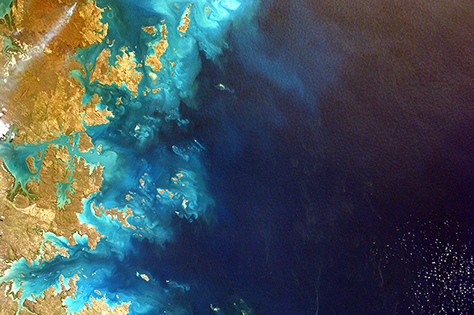 To mark World Oceans Day, we look at the origin and concept of the “blue economy”.

The idea of the “blue economy” was conceived at the Rio+20 United Nations Conference on Sustainable Development, held in Rio de Janeiro in June 2012. This conference addressed two key themes: the further development and refinement of the Institutional Framework for Sustainable Development and the advancement of the “green economy” concept. The outcome of the meeting reaffirmed poverty eradication as its key challenge and focused on the green economy as a tool to achieve both poverty eradication and sustainable development.

The blue economy concept has been presented subsequently in many fora and is viewed as an alternative economic model for sustainable development that puts the oceans at the centre of this approach.

During the Rio+20 preparatory process, countries with coastlines were concerned about the focus of the green economy and its applicability to them. Robust statements were presented in support of a “blue economy” concept to address these nations’ situations more appropriately. The blue economy concept has wide relevance, as the oceans, including humankind’s common heritage of the high seas, represent in many respects the final frontier for humanity and its quest for sustainable development. Institutional efforts were made to expand the blue aspect of the green economy, and these were embodied in the Green Economy in a Blue World report, but international momentum has since moved on.

The oceans cover a large proportion of the earth’s surface and make up more than 95 per cent of the biosphere. They provide much of the world’s population with food and livelihoods and are a significant means of transport in global trade. The marine and coastal environments also constitute key resources for the important global tourism industry, supporting all aspects of the tourism development cycle, from infrastructure and the familiar “sun, sand and sea” formula to the diverse and expanding domain of eco-tourism.

The seabed is a major source of hydrocarbons, and exploration in this area is expanding. New technologies are advancing the frontiers of marine resource development, including bio-prospecting and the mining of seabed mineral resources. The sea also offers vast potential for renewable “blue energy” production from wind, wave, tidal, thermal and biomass sources. The potential of the oceans to meet sustainable development needs is enormous, but only if the oceans can be maintained in and/ or restored to a healthy and productive state.

The developing world has been the driving force behind the blue economy, pioneered by small island developing states (SIDS), but the blue economy is also relevant to other coastal states and to countries with an interest in waters beyond their national jurisdiction. Indeed, although SIDS have always been highly dependent upon the seas for their livelihoods and well-being, the blue economy goes beyond just the concept of ocean-based economies; it also identifies the oceans as development spaces where spatial planning integrates conservation, sustainable use, oil and mineral extraction, bio-prospecting, sustainable energy production and marine transport. The blue economy has brought to the fore that the oceans are not simply places for the extraction of free resources and the dumping of waste products. It gathers together ocean values and services into economic modelling and decision-making processes. The blue economy paradigm constitutes a sustainable development framework for developing countries that will help to address issues such as equity in the access to, development of and sharing of benefits from marine resources, offering scope for reinvestment in human development and the alleviation of crippling national debt.

The blue economy embraces the same desired outcomes as the Rio+20 green economy initiative: “[achieving] improved human well-being and social equity, while significantly reducing environmental risks and ecological scarcities” (UNEP, 2013). It also endorses the same principles of low carbon use, resource efficiency and social inclusion, but it is grounded in a developing world context and is designed to reflect the circumstances and needs of countries whose futures depend on marine resources. Fundamental to this concept is the principle of equity, ensuring that developing countries: optimise the benefits received from the development of their marine environments (e.g., fishery agreements, bio-prospecting, oil and mineral extraction); promote national equity, including gender equality and in particular the generation of inclusive growth and decent jobs for all; and have their concerns and interests properly reflected in the development of seas beyond national jurisdictions, including the refinement of international governance mechanisms and their concerns for states proximate to seabed development.

It is increasingly recognised that the future of many SIDS depends on the sustainable development and protection of the ocean and ocean resources.

This article was originally published in the March 2016 issue of Connections.