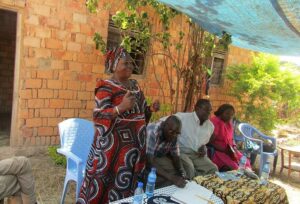 COL’s L3F partner in Tanzania is Matumaini Mapya (MM), a women’s and children’s empowerment NGO. Tanzania’s Kagera region has adopted the L3F model, which reaches over 13,000 participants, mostly women. COL has helped MM strengthen its partnership with additional partners, such as Kasibante FM Radio, OUT and the Bukoba Municipal Council (BMC). As a result, the capacity of BMC’s Ward Community Development Officers and Agriculture and Livestock Extension Officers as L3F facilitators was boosted. Kasibante FM radio has been used in farmer education on sustainable agriculture through weekly programmes aired at times convenient for the farmers.

MM has mobilised new SACCOs in the Muleba and Karagwe districts of Tanzania to adopt L3F. MM has also developed print- and multimedia-based learning resources that have been applied in the capacity building of SACCO members, utilising an integrated approach that involves the use of both radio and mobile-based strategies, complemented by face-toface interactions.

The L3F programme has helped to increase the annual turnover of many SACCOs in the Kagera region, which has attracted the attention of the Ministry of Agriculture. In February 2019, MM hosted a meeting in Bukoba with officials from the Central Bank of Tanzania to discuss the possibility of working together on strategic initiatives to help implement the National Financial Education Framework in the Kagera region.

In December 2019, MM and COL co-organised a workshop in Dar es Salaam for staff members from the Bank of Tanzania, Mkombozi Commercial Bank and the Ministry of Agriculture to increase their understanding of the opportunities for using cognitive social capital as collateral, along with the strategies and policies necessary to promote producer finance companies.

Over 500 learners have now enrolled in L3F’s mobile learning platform through MM, over 100 table bank leaders have been trained in financial management, more than 300 farmers have been trained in loan negotiation, and over 550 farmers have accessed loans. MM has established a partnership with the TARI – Common Beans Project, creating an opportunity for the L3F programme in Tanzania to operate at the macro level by covering Tanzanian beekeepers’ entire region.

The Tanzania Bankers Association has agreed to partner with COL and MM on a credit guarantee scheme to recognise learning as collateral. In December 2019, jointly with the Ministry of Agriculture, the Central Bank of Tanzania, Mkombozi Commercial Bank and MM, COL held a Credit Guarantee Scheme project design workshop in Dar es Salaam with 12 participants.

The 3,000-shareholder Tanzania Producers Financial Company Limited has been registered by MM, along with three SACCOs in the Kagera region. Towards the end of 2020, MM registered 64 new shareholders. COL supported a policy advocacy/study with the Ministry of Agriculture of Tanzania, with a view to integrating table banking and lifelong learning into co-operative law.